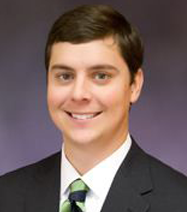 Though Glenn is a native of the Pacific Northwest, he has been a Glynn County resident since 1988, and is a 2000 graduate of Glynn Academy High School. After graduating from the University of Georgia in 2004, Glenn attended the University of Alabama School of Law where he organized the United Blood Services Blood Drive, was active with Habitat for Humanity, and volunteered to cook hot meals at the Community Food Bank in Tuscaloosa, Alabama.

Since returning to Glynn County in 2008, Glenn has stayed active in community service, serving as Board member and former Director of Operations of Big League Impact, a non-profit organization that works directly with a community of current and former Major League Baseball players to develop and produce unique, high-impact charitable initiatives that address the most pressing needs facing our world today. Glenn also serves on the board of Adam and Jenny Wainwright’s 25:35 Foundation, which provides necessities such as food, water, clothing, and shelter to those in need in coastal Georgia and around the globe.

Glenn has been recognized by Martindale Hubbell for his strong legal ability and high ethical standards, earning the ranking of AV Preeminent. This rating is peer reviewed and is the highest level of professional excellence.

Glenn and his wife, Christina, live on St. Simons Island with their son. He is an avid golfer and music lover, and may be found from time to time around the Golden Isles playing guitar with his band.

We will respond to your inquiry in a timely fashion. Thank you.